Meditating Out of the Recession 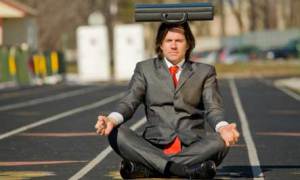 Last week I spoke to an associate about the success of Transcendental Meditation (“TM”) in the United States only after Maharishi Yogi started charging for his mantra. I had read Dr. Herbert Benson’s Relaxation Response and had begun mediating with my made up mantra. When I moved to Cambridge, MA. I found out that the local TM center was charging $25 for an authentic mantra. Maharishi Yogi had limited success giving away his TM method. So he did what all great U.S. marketers do, he started charging for it. I of course proved him right by paying for a mantra after trying my free one first. This got me thinking about how that lesson could apply to today’s recession.

Price still has a unique role in our market. We continue to connote price with quality. American’s are in love with Apple and Apple’s strategy of price premiums is a current example. The success of “pre-owned” luxury cars is another.

So rather than playing traditional economics and cutting price to maintain volume, consider the TM approach of raising price and quality.

Not only did Maharishi raise price from free to $25, he raised quality. He opened centers in prime markets, like Cambridge, MA. He increased the training; his sales forces were clean cut Americans who talked in a calm and relaxed manner.

Sure, this approach won’t increase volume but it may increase share with those consumers still employed and holding disposable income. High end restaurants are still doing great. Those with money still enjoy spending a premium for exclusivity, perceived quality, and just to show they can. The family may have shrunk, but “The Jones” remain The Jones. And when the recession turns, Americans will continue to want what the Jones’ just acquired.

So go ahead and focus on raising price and quality today. Maharishi’s TM enterprise shouldn’t be the only venture with a fleet of Rolls Royce.

The Psalmist understood this as well when he wrote in Psalms 1: 2-3, “His delight is in the law of the Lord, and on it he meditates day and night. He is like a tree planted by the streams of water, which yields its fruit in season and whose leaf does not wither. Whatever he does prospers.”

I am the founder of Pro356 Consulting which focuses on promoting organizational wellness, productivity, and profitability. I hope to share insights I have learned from so many others in living my life. If they prove useful to anyone, then my time here is well spent. While I have a Harvard MBA, I think I learned quite a bit as a 11 year old paper boy. And I know I will learn from anyone who comments back. Wishing you a masterpiece day, Rick
View all posts by pro356rick →
This entry was posted in Change management and tagged Leadership, marketing strategy, meditation, motivation, quality. Bookmark the permalink.

2 Responses to Meditating Out of the Recession

This site uses Akismet to reduce spam. Learn how your comment data is processed.